technically, after you hear it, YOU are the one with the bad take. i merely supplied the bad give
Thursday July 28th, 2022 at 11:58 AM

jsled
reply
I will always re-share a "what idiot called it X instead of Y" joke.
South Burlington, Vermont

Hovertext:
This also explains the abundance of normal matter in the universe is the result of a battle against the Diraculons.

I will always re-share a "what idiot called it X and not Y" joke.
South Burlington, Vermont

So here are two charts that show what's been happening to wages over the past two years. First up is a chart showing the growth of wages alongside the growth rate of inflation:

Next is a chart of hourly wages that's been adjusted for inflation:

Either way you look at it, wages are down. Unless you can eat a nominal dollar—and you can't—this is the real state of earnings in the US for the past two years.

On Business Cycle Dating from NBER:

The NBER's definition emphasizes that a recession involves a significant decline in economic activity that is spread across the economy and lasts more than a few months. In our interpretation of this definition, we treat the three criteria—depth, diffusion, and duration—as somewhat interchangeable. That is, while each criterion needs to be met individually to some degree, extreme conditions revealed by one criterion may partially offset weaker indications from another. For example, in the case of the February 2020 peak in economic activity, the committee concluded that the subsequent drop in activity had been so great and so widely diffused throughout the economy that, even if it proved to be quite brief, the downturn should be classified as a recession.

Because a recession must influence the economy broadly and not be confined to one sector, the committee emphasizes economy-wide measures of economic activity. The determination of the months of peaks and troughs is based on a range of monthly measures of aggregate real economic activity published by the federal statistical agencies. These include real personal income less transfers, nonfarm payroll employment, employment as measured by the household survey, real personal consumption expenditures, wholesale-retail sales adjusted for price changes, and industrial production. There is no fixed rule about what measures contribute information to the process or how they are weighted in our decisions. In recent decades, the two measures we have put the most weight on are real personal income less transfers and nonfarm payroll employment.
emphasis added 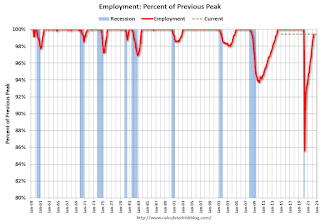 This graph is for employment through May 2022.

Employment is currently off about 0.5% from the pre-recession peak (dashed line).  This is a significant improvement from off 14.4% in April 2020. 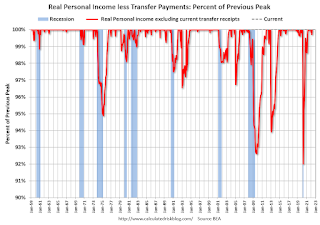 And the second graph is for real personal income excluding transfer payments through May 2022.

Real personal income less transfer payments was at an all-time peak in May 2022.

These graphs are useful in trying to identify peaks and troughs in economic activity - and neither are suggesting a recession.
Note: See: Predicting the Next Recession.  I'm not currently on recession watch.
Read the whole story

Stop Politicizing This Thing That Can Only Be Solved Through Politics by Eli Grober
Friday June 10th, 2022 at 1:02 PM

We politicize every kind of tragedy these days, and it disgusts me. Take, for instance, this latest terrible thing that just happened. It’s awful—incomprehensible, even! But why do we need to bring politics into it? Because it’s the only way to make sweeping, long-term change? Despicable! Stop politicizing this thing that can only be solved through politics.

Why can’t we just let a bad thing happen instead of “trying to solve it”? Can’t we simply witness the worst thing imaginable occur, and then take a step back and… not do anything? Everyone’s always trying to “pass laws” and “organize” to prevent unbearable tragedy—but that’s all political stuff, and I can’t stand anything with the word “politic” inside of it. So please, stop politicizing horrendous tragedies that can only be fixed if we politicize them.

Look, I don’t like bad things just as much as the next person. But I don’t like politics more. This is why I’ve been calling my representatives and asking them to stop taking part in politics. I’m also replying to every single tweet about potential solutions to this terrible thing that keeps happening with the same words every time: “Stop politicizing this horrifying thing that can only be solved through politics!”

To be clear, I have a pretty loose definition of politics. To me, politics is anything that’s trying to make the world a better place for its most vulnerable people. That may not be how most people define politics, but it sure as hell is how I define it so that I can continue to be upset when people try to politicize literally anything.

Don’t you see how that would be terrible for me?

Today on Married To The Sea: sheep lifehack